Creating psychological safety in your workplace 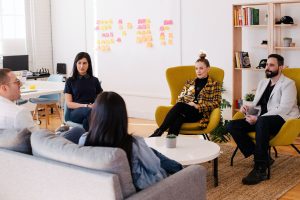 The term has been around since the 1990s but what does psychological safety in the workplace actually mean?

Being comfortable enough to speak up and share ideas is a vital part of any working environment. But what if employees don’t feel that they can do that? In that case, it means there’s a lack of psychological safety in their workplace.

Coined by Harvard Business School professor Amy Edmonson, psychological safety is “a belief that one will not be punished or humiliated for speaking up with ideas, questions, concerns or mistakes.” In fact, Google found that psychological safety was the most important factor in creating a dynamic and innovative workplace or team.

Similarly, Google found that teams that make more mistakes end up being more dynamic and successful than those that don’t. One of the reasons for this is that teams and workplaces with psychological safety, are willing to take more risks.  And with greater risk, comes greater reward.

Creating psychological safety in your workplace

So how can you create a more psychologically safe environment in your workplace or team?

One of the most important things you can do is to be present and engaged during meetings. Nobody enjoys presenting to a team when their audience is on their phone or writing an email to someone else. If you’re in a leadership position, it tells your employees that you’re not interested in what they have to say, making them less likely to contribute in the future.

Including your team in decision making around key projects will also increase psychological safety. It shows your team that you value their input and gives them more ownership over the project. Then once the decision is made, explain the reasoning behind it. How did their feedback factor into the decision? What other considerations were made? Even if your employees don’t agree, they’ll appreciate the honesty and transparency behind how the decision was made.

Finally, be open to feedback. Constructive feedback is vital when it comes to learning and growing. Avoid accusatory statements such as ‘Why did you do that?’ as this can put people on the defensive, making them less likely to be open to your feedback. Instead, keep it constructive and allow for a discussion. Questions like ‘what would you like to see more of?’ or ‘what can we learn from this?’ allow for more reflection.

Remember, change won’t happen overnight! But by increasing small changes that enhance the psychological safety in your workplace, you’ll start seeing the benefits!